On 13th of June President of the WBA Remigijus Lapinskas and Executive Director Karin Haara hosted HE Mr. Azamat Sarsembayev, Minister-Counsellor  from Embassy of the Republic of Kazakhstan to the Kingdom of Sweden, at WBA’s headquarters in Stockholm.

As the Republic of Kazakhstan is hosting this Year an EXPO-2017 Exhibition, which is dedicated to future’s energy and aims to create a global debate, trying to develop answers, related to how the issue of global climate change could be managed while developing the safe and affordable access of humanity to energy, Mr. Sarsembayev was very interested in getting acknowledged with the mission and activity of the WBA.

After giving direct answers on recent activities of the WBA globally, Remigius Lapinskas pointed out, that Kazakhstan is still a “white spot” in the map of the WBA. However,  he expressed the will, that Kazakhstan, being a well-known global grain producer and exporter, should be in interest to develop biomass energy, using the agriculture residues.

Mr.Sarsembayev explained, that electricity production in Kazakhstan is based on utilization of fossil fuels, added by 12% coming from hydro-energy. Only 1% of electricity production comes from wind, solar and biomass generators. Country has installed (data of the Year 2016) 98,2 MW of wind energy, also 57,3 MW of solar energy and only 0,4 MW of biomass CHP. Also there are 139,9 MW of small hydropower stations.

But the state’s concept of the “Green economy” forecasts expansion of electricity production from Renewable energy sources to 3% in 2020, 10% in 2030 and 50% in 2050. The presumptions for bioenergy development also exists: every year millions of tons of straw remains unutilised in the limitless steppes of Kazakhstan, where grain is grown from the 6th decade of last century.

Different options of such a bioenergy development have been discussed, and general data on country’s demographical, economical, environmental situation have been provided to WBA. As WBA’s mission is promotion and development of bioenergy in all the countries of the world, the idea of  possible WBA’s  mission to Kazakhstan was also discussed.  Mr. Sarsembayev expressed a an opinion, that embassy of the Republic of Kazakhstan to the Kingdom of Sweden will try to assist in organizing of such a trip. The forecasted visit could take a place in the first half of September this Year, to match the Kazenergy Eurasian Forum. 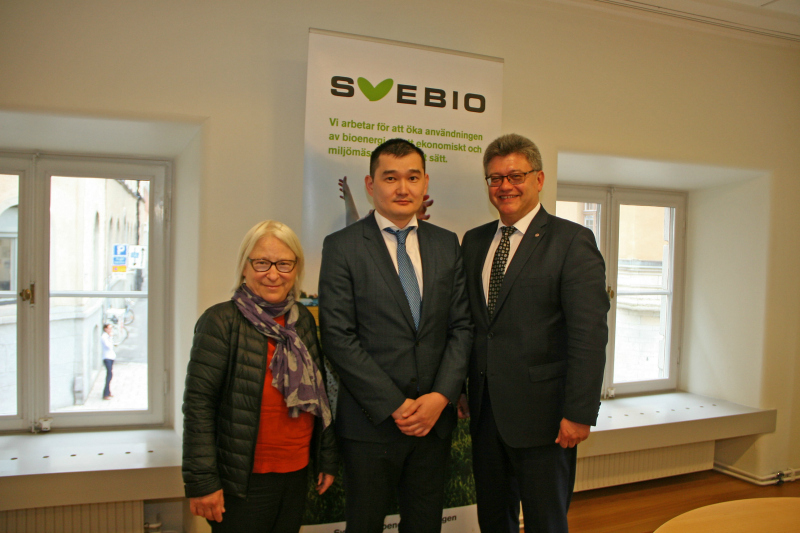